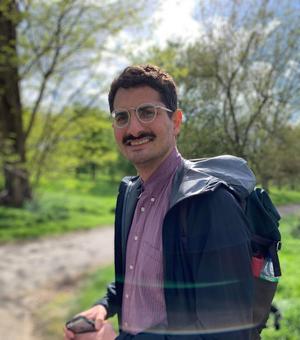 Daniel Ibrahim Abdalla is completing his DPhil at the Faculty of English, University of Oxford. His research examines the significance of evolutionary biology to neglected works by three prominent American expatriate writers of the late nineteenth and early twentieth centuries: Henry James, Edith Wharton and Elizabeth Robins.

Alongside his thesis, he worked on the Diseases of Modern Life project as a part-time Research Assistant from February 2019 to the project's end in July. His research for the project focused on representations of hereditary degeneration in fin-de-siècle drama, and he published the article '“Heredity, Heredity!”: Recovering Henry James’s The Reprobate in Its Scientific and Theatrical Contexts' in Modern Drama. He also designed and managed the current Diseases of Modern Life website; planned the Mind Reading 2019: Adolescence, Literature and Mental Health conference; recorded and published the podcast After the Show: The Victorian Speed of Life, and assisted in compiling and planning the project's database. He also designed and managed the current Constructing Scientific Communities website.

Daniel’s academic work has also informed various related projects. He was asked to contribute a preface for Hurst Street Press’s series ANON, which celebrates the work of undervalued women writers. He has presented on the relationship between queer theory and literature and science at the AHRC-funded one-day workshop ‘Humanitarian Fictions’ (King’s College London, 2018) and at the Oxford Queer Studies Network (2018). In 2019-20, as Esmond Harmsworth Graduate Scholar, he will convene the American Literature Research Seminar at the Rothermere American Institute, University of Oxford and will be a visiting researcher at the École normale supérieure (Paris).