In the nineteenth century, natural history was an increasingly popular pursuit. As our sister project Constructing Scientific Communities is exploring, the 1800s saw the growth of several specialist organisations and periodicals devoted to the field. Enthusiasts from various sections of society – both ‘amateur’ and ‘professional’ – worked to build up collections of their own, or formed networks with others to share their findings and contribute to classificatory schemes.

One such enthusiast was Mervyn Grove Palmer, a naturalist who spent several years  travelling throughout Central and South America in the early 20th century. Many of the specimens that he collected can still be seen today in Devon’s Ilfracombe Museum. Opened by Palmer in 1932, the Museum housed his growing collection of specimens from afar as well as items donated by local people providing an insight into Devon’s social history. In the main room of the Museum is an unassuming set of dark wood display drawers, adorned with plain typed labels indicating their contents. Many of these drawers contain familiar natural history displays – beetles, moths, and other insects. In one, butterflies are arranged in precise formation, as if flying away from the viewer, their bright yellow and vivid orange wings perfectly preserved.

In another, bird’s eggs are nestled into fluffy clouds of cotton wool – spotted, speckled, pearlescent, sometimes cracked. Their labels are handwritten on delicate ribbons of paper strung between each grouping, adding aesthetic appeal to the display at the same time as they organise it. 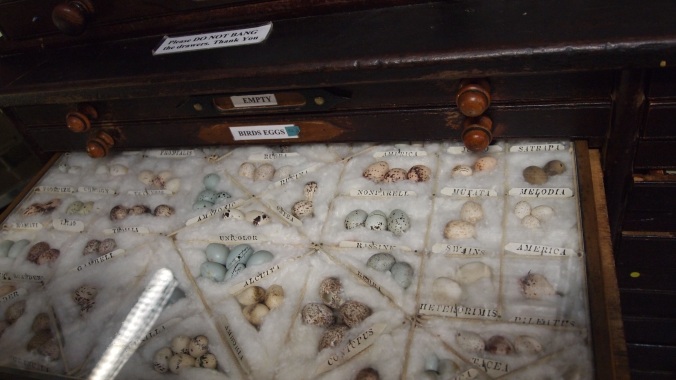 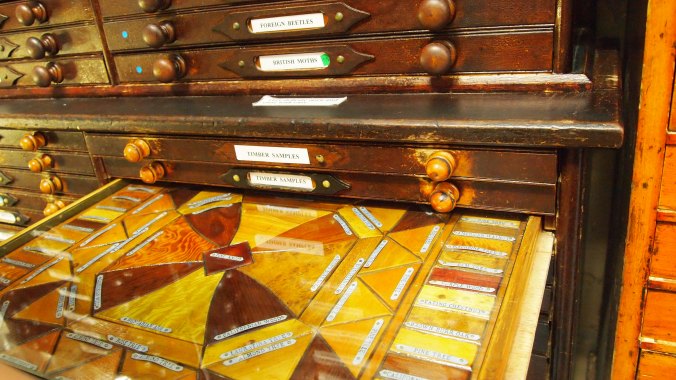 Most striking, though, are the drawers that work to construct rather novel ‘natural histories’ of local life and custom. Beneath drawers containing British moth specimens is a suddenly incongruous label that reads ‘Old wedding cake’. 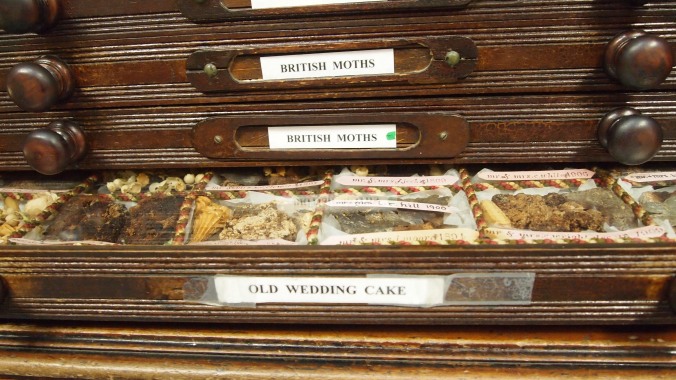 Opening the drawer, we find a series of squares separated by coloured cord, each containing a small piece of wedding cake donated by a happy couple. Ensconced under glass, an 1887 sample is presented alongside some of its accompanying leaf and berry decorations. Other couples have donated silver leaves, flowers, and yellowed fragments of icing.

The placement of this natural ‘social’ history next to entomological and other specimens is a wonderful surprise to the visitor. It is a neat illustration, I think, of how we might preserve material fragments of social, as well as natural, histories.