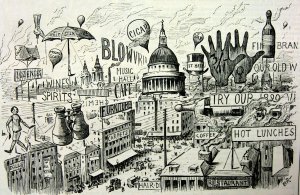 On 10th and 11th September, the Diseases of Modern Life team held its main conference, 'Medicine and Modernity in the Long Nineteenth Century' at St Anne's College, Oxford. Over the weekend, we explored phenomena of stress, overload, overpressure, and other disorders associated with the problems of modernity in the nineteenth century. Discussion, both online and offline, was extremely rich and we had over three hundred conference tweets throughout the two days. A storify summary of the event is available here.

Our first keynote speaker, Professor Christopher Hamlin, delivered a lecture entitled ‘What is your Complaint? Health as Moral Economy in the Long Nineteenth Century’, in which he spoke persuasively about the different states, perspectives, and currencies of health which operate outside of, or at times even in conflict with, those medical histories and diseases that are largely defined by doctors. Professor Hamlin’s address is available here:

Our second keynote was delivered by Professor Laura Otis and entitled ‘What’s at Stake in Judging the Health and Pathology of Emotions?’ In her presentation, Professor Otis asked under what circumstances emotions – or lack of emotions – might be considered pathological, and she offered a reading of Dickens’s Miss Havisham as a woman paralysed by anger, who demonstrates the widespread damage that one angry person can do. Professor Otis’s address is available here:

One delegate remarked during a coffee break that he had at first been uncertain about the parameters of our conference, as in many ways our call for papers might apply equally to the nineteenth century and to the twenty-first.  And this was certainly a frequent refrain in many of our panels. As parallels were continually drawn to  present day stresses and strains, questions were raised about how much has in fact changed and what we might learn from our studies of the past. Many of our speakers responded to this challenge by tracing productive discussions across the fields of literature, science, and medicine, or by providing rich comparative perspectives from international viewpoints, drawing on sources from Finland to France, Germany, America, Japan, India, South Africa, and the South Pacific to reveal connections between physiological, psychological and social health, or disease. What emerged through this work was a far more integrative and holistic approach to notions of disease, one that disrupted the frequent compartmentalization of psychiatric, environmental, emotional, and literary histories in present practice in order to offer new ways of contextualising the problems of modernity.

Over the coming weeks, we will be featuring a selection of our speakers’ papers in the form of blog posts on the website, in order to continue the rich discussions started at the conference. We hope you enjoy them.