Inside and Outside Bodies at the University of Glasgow

Dr Melissa Dickson and Dr Jennifer Wallis will be speaking about two moments of Victorian social and cultural anxiety in a panel entitled ‘Inside and Outside Bodies: the Science of Micro and Macrocosms’ at a one day interdisciplinary conference on Anxious Forms: Bodies in Crisis in Victorian Literature and Culture, to be held at the University of Glasgow on Friday, 22nd August.

In her paper, ‘Sounding Out the Body: Laennec’s Stethoscope and the Anxiety of Inner Acoustics’, Melissa Dickson will foreground the potentially uneasy relationship between abstract, invisible sounds and the visible, sound producing bodies of nineteenth-century patients. When, in 1816, René Laennec sought to overcome his difficulties in examining an obese girl with symptoms of heart disease by rolling an exercise book into a cylinder and placing one end at his ear and the other at her precordial region, he discovered that he could hear the sounds of her chest more clearly than if he had applied his ear directly to her body. Three years later, he published a 900 page treatise on the art of mediate auscultation, filled with descriptions of the various sounds he had detected through use of the stethoscope and the diseases they signified. In its gradual adoption by medical practitioners across Europe and America, the stethoscope, a powerful symbol of modern medical practice, marked – as Jonathan Sterne has observed – an important shift in the Western history of listening, whereby the voice of the patient was no longer the basis of diagnosis but existed in relation to other sounds made by and within the patient’s body. However, the ability to hear and to interpret those internal sounds remained exclusive to the trained ears of medical professionals. What of the stethoscope’s effects upon the increasingly objectified patient, unable to hear the sounds of his or her own body?

Laennec using his stethoscope at the Hospital Necker.

Drawing on representations of the stethoscope in nineteenth-century literature, poetry, and the periodical press, Melissa will offer insight into the emergent corporeal anxiety implicit in the development of this new medical technology, and the ways in which the stethoscope served as an interface between constructions of presence and absence, and between material and immaterial realms.

Jennifer Wallis’s paper, ‘Gloom and Misery Everywhere? Stormy Weather and Human Barometers in the Victorian Asylum’, conceives of the anxious body as an expectant body, examining work from the late nineteenth century in which the body of the asylum patient became something of a forecasting tool. At Sussex Asylum, chaplain Thomas Crallan collected a range of meteorological data that he charted alongside the condition of asylum residents. In doing this, Crallan was expanding upon older folkloric ideas about the susceptibility of the insane to atmospheric influence – such as the lunar cycle – and reformulating these within the discourse of late Victorian meteorology. 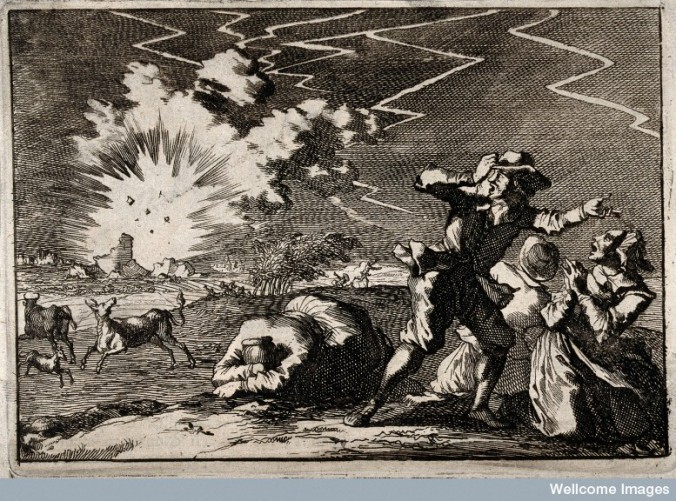 The supposed effect of storms on the minds and bodies of asylum patients was one question considered by Thomas Crallan at Sussex Asylum.

Jennifer will use Crallan’s investigations at Sussex to consider how meteorological data was employed in the study of mental disease. In viewing certain classes of asylum patients as ‘human barometers’, commentators implicitly linked them with those ‘lower animals’ long said to possess an acute awareness of impending meteorological changes. Thus, discourses around meteorology in the asylum raised the spectre of degeneration, feeding on widespread anxieties about the impact of the external environment upon both the body and the mind. Medical meteorology, as a developing and self-consciously ‘scientific’ practice, was also a body of knowledge that itself raised anxieties: about the interaction of the medical man and the amateur observer, and – for churchmen like Crallan – possibly forcing observers to examine their personal positions on matters of God and nature.

More information about the conference and its programme is available here. And best of all, it’s free to attend!