Worked to the Point of Madness

This is a guest post by Dr Amy Milne-Smith, Associate Professor of History at Wilfrid Laurier University, Canada currently researching representations and understandings of men and madness, 1850-1914.

The Victorians respected hard work. The ability of a man to focus his attention, put his nose to the grindstone, and simply get the job done was not only lauded, it was expected. In fact, the doctrine of hard work became a moral imperative, spread with missionary fervour through the likes of Samuel Smiles. In his 1887 work, Life and Labour, Smiles defined a man by his relationship to work. “Every man worth calling a man should be willing and able to work.”

And yet co-existing with this mantra of hard work and manly pride were great fears of the potential costs of such devotion. Not only were there moral fears of becoming hard, or rapacious, or materialistic—there were also fears that overworking the brain could lead to a breakdown. Serious concerns about the fate of men’s brains due to the pressures of modern work and life led many to seek out pre-emptive solutions.

Victorian quack doctors had unparalleled abilities to prey on contemporary fears to sell miracle cures. The aptitude of medical charlatans to root out and exploit underlying anxieties makes them an incredibly rich resource, therefore, to uncover people’s fears. And clearly, the overworked man was a source of concern. 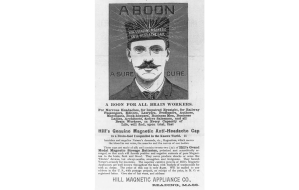 In 1901 one such “doctor” named Rumler proclaimed in the fifteenth edition of his work (there are never first editions of such books) on the causes of neurasthenia. This is perhaps the best-known disease of the modern, urban, overworked professional. Neurasthenia threatened not only the individual, according to Rumler, but also the nation. As he explained:

…the State needs men, true men, energetic in body and soul. But what is produced instead is a lot of puny youths who are already worn-out old men; the real men are becoming few and far between, and this will go on as long as the real causes of bodily and mental misery and the decline of nations are not recovered.

A chief cause of this bodily and mental decay is too much “brain work.”

The dangers of overwork worried all manner of doctor from the charlatan to the legitimate. The much-discussed Victorian diagnosis of neurasthenia was, however, the less serious results of pushing oneself too far. There were fears that overwork could lead to complete madness. And these fears were not limited to the so-called experts. Everyday people felt the potential dangers of overwork as well.

LIVING WITH THE FEAR OF MADNESS

E.F. Benson is best known as the author of the Dodo series and the ‘Mapp and Lucia’ novels. But he also came from a family gifted with talent and plagued by serious mental health issues. As a prolific writer, the shadow of overwork was never far from his mind or his family experience. Detailing life inside this incredibly talented family in his 1921 memoir Our Family Affairs, he outlines the cost of overwork. He strongly believed his brother Robert, an author and Roman Catholic priest, died from overwork. Another brother Stephen worked himself to madness at a young age and died in an institution.

Thus when Benson described an artist tortured by his work, his memory, the sins of his past in The Judgment Books, the portrayal is tinged with heightened realism and immediacy. Faced with the suggestion that he do a sensible day of work the protagonist bellows “All good work is done in a sort of madness or somnambulism—I don’t know which. Everything worth doing is done by men possessed of demons.”

Such ideas resonated with a populace that already believed in the connections between madness and genius. There was a sneaking suspicion that perhaps madness was a necessary complement to genius, or an inevitable side effect. The spectre of absolute madness was a real concern for men of genius and hard work.

THE STAKES OF MADNESS

The potential of men’s overworking themselves to madness was terrifying. With the hope of a cure waning in the latter half of the nineteenth century, the diagnosis of madness often meant the end of productive life. And without his work, or his ability to control his mind, a Victorian gentleman was hardly a man at all. As Janet Oppenheim notes in her classic text ‘Shattered Nerves’ the ability of men to control their emotions became increasingly paramount to their identities. The inherent irrationality of a madman thus made him either a brute or an effete. Work too little and risk being branded lazy and useless; work too much and risk descending into madness. The stresses of modern life posed some unwinnable scenarios.