On Thursday 18th October, the Museum of the History of Science threw open its doors for its first ever ‘late’ – Victorian Speed: The Long History of Fast Living. With six separate activities based on our postdocs’ research interests and a Victorian photo booth to boot, we had a riotous evening of nineteenth century hijinks.

Here, the Diseases of Modern Life team reflect on their individual activities.

My “Timing the Victorians” quiz invited guests to try to guess the speed of various aspects of life in the 1800s. Many quiz-takers were amazed by how fast some things were (it took only 9 minutes to send a telegram from London to Bombay!), but were also caught off-guard by the slowness of other aspects of Victorian life (convalescent homes let patients stay by the seaside for a month or more to recover their health). I enjoyed hearing the ways people reasoned their way through the questions, and some even gasped or cheered when they discovered their hunches were correct. In the end, my aim was to help people imagine more concretely what life was like in the 1800s, so I was really pleased when one person reported that the event made her “reevaluate a nostalgic view of the Victorian era."

Eager to find out if they are correct! Photo: Ian Wallman

My 'telegraphic tweeting' activity introduced visitors to the full experience of sending an 'instant' message in the Victorian age. After considering many of the practicalities of sending a telegram, from the limitations of post office opening hours to the relatively high cost of sending a mere 20 words, they were then encouraged to have a go at sending their chosen message to another visitor 'across the line'(or, rather, table) using one of the replica telegraph apparatuses. It was great to see that people from a wide range of age groups had fun trying out this activity – some of the children who attended were natural 'Morse coders', and some of the adults enjoyed trying to bemuse their counterparts across the table by sending messages in foreign languages! 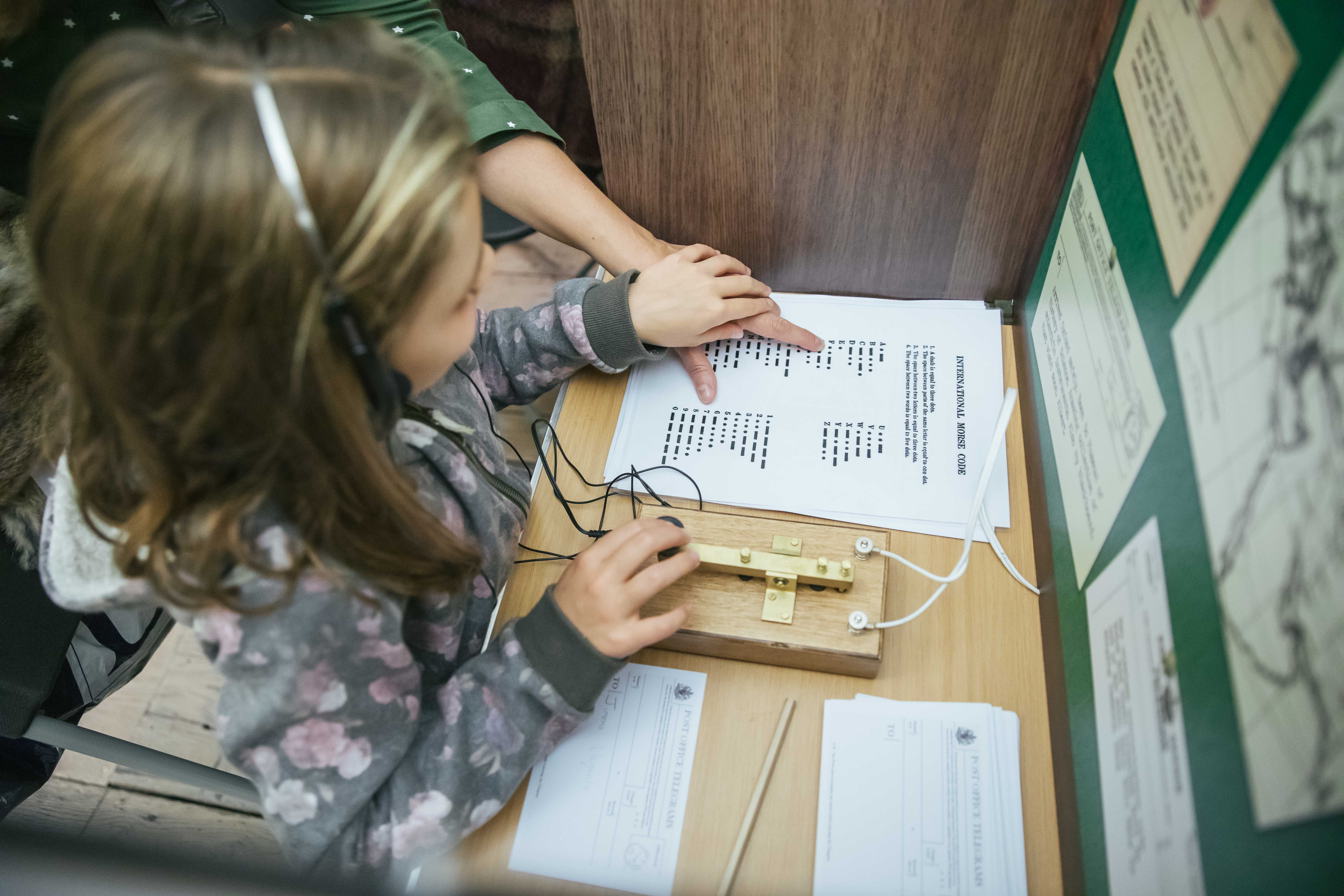 Receiving and decoding - the effort is palpable! Photo: Ian Wallman

'Death and Disease Behind the Counter' introduced visitors to the pressures of retail work in the late nineteenth century. The title was drawn from Thomas Sutherst's 1884 book about the plight of shop assistants, and I used pie charts to explore the long hours worked by those in retail, drawing on case studies from fiction, periodicals, autobiographies, and polemical writing. People were particularly surprised and aghast to hear about the demands placed on teenaged apprentices and the pressures of the 'living-in' system, which blurred the boundaries between work and leisure time. Visitors used blank pie charts and colouring pencils to plot their own average working day, and shared their retail work 'horror stories' on our interactive board. There were common themes between then and now, namely the long hours, the expectation to stand rather than sit, and the perennially rude customers. One women told me how, when working in a supermarket, a customer threw broccoli at her after hearing they'd run out of brie! In the feedback, several visitors suggested the activity had prompted them to find a new appreciation of our modern work-life balance.

Dr. Alison Moulds looks on as participants colour in their own 'A Day in the Life' charts by the 'Retail Horror Stories' board. Photo: Ian Wallman

One member of the public shades in her 'work time'. Photo: Ian Wallman

In the 'Emergency' quiz we introduced visitors to the history of first aid, as we got people sorting fact from fiction and past from present by testing them on first aid trivia. The development of the first aid movement was an important aspect to people's growing awareness of the health risks of modern life in the nineteenth century, as organisations like the St. John Ambulance Association trained up railway workers, miners, police officers and others to deal with the accidents and illnesses that seemed to arise from new technologies and industries. For the game, visitors were given ten statements relating to first aid. They then had to decide whether they related to first aid practices in the past, current day first aid practice...or whether we had made it up! The idea was to get people thinking about how ideas and practices can come in and go out of fashion, and how even the strangest practices from the past were based upon theories that appeared valid at the time. For example, 'Blowing tobacco smoke into the anus of a semi-conscious person will revive them' (past) introduced people to the use of tobacco smoke enemas in the nineteenth century for resuscitation, a medical technology which seems completely bizarre now but which had its roots in the belief that quickly administering warmth and stimulation could be effective in to reviving the near dead. The tobacco enema also led to conversations about early attempts by doctors to find effective resuscitation techniques. The statement 'a snakebite can be treated by sucking the poison out from the wound' was another one that generated debate. Until relatively recently the practice was recommended in first aid manuals, but it today considered ineffective, and yet most people thought it a 'present' day practice, because it is still seen in TV and films. This led to discussion about how even when new medical evidence proves a medical idea is not right, the idea can linger on in wider culture. 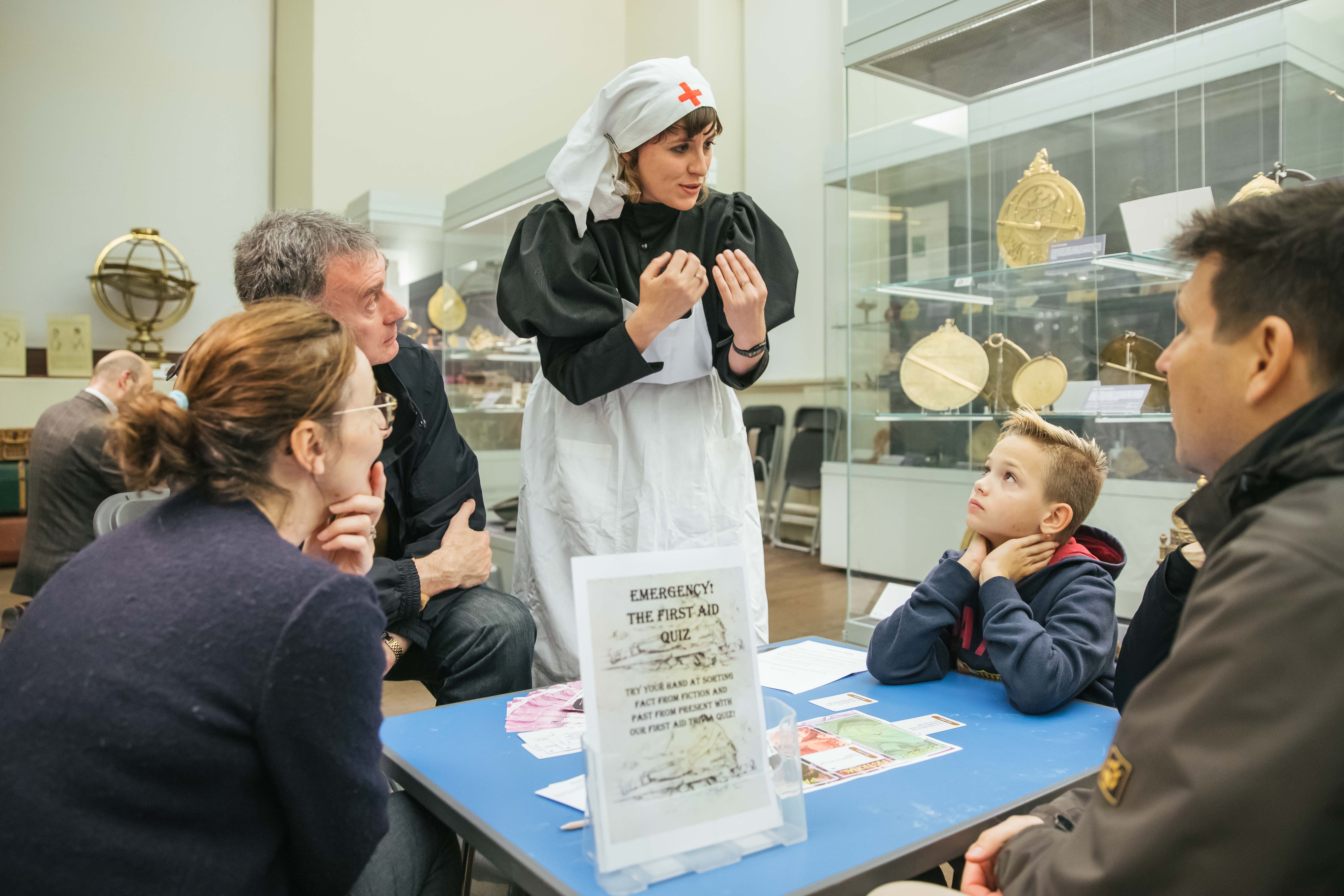 Who knew Victorian First Aid could be so fun?! (We had a hunch). Photo: Ian Wallman

My exhibition, ‘Gastric Time’ started with a story. It was the story of Alexis St Martin, a Canadian man who was shot in the abdomen in 1822, which left him with a hole in his stomach through which the workings of digestion were made visible! People were intrigued and disgusted in equal measure as I recounted how American army surgeon William Beaumont carried out a series of experiments on St Martin which involved dipping bits of food into his stomach on a silk string and timing how long they took to break down! The language of ‘digestibility’ that was produced from the experiments led to a new way of thinking about food: in terms of time. After discussing how Victorian meals and dietetic rules differed from their modern experiences, they were keen to put their own hands in my oversized woollen stomach to choose their meals and try to beat the clock-time dice. If they succeeding in “digesting” 5 meals within 24 hours—symbolised by a giant steam-punk clock face—they were rewarded with a “good digestion” sticker, if not they were diagnosed with chronic indigestion! People enjoyed thinking about food in relation to broader ideas about standardising and controlling bodily processes and were not too shy to sit on our Victorian commode! My advertisement for a “rocking horse” cure for indigestion gave one man a new outlook on the French phrase “aller à la selle” (to have a bowel movement), while the exhibition as a whole purportedly changed many attitudes to dietary choices and even inspired a new MPhil project!

‘Clusters of hard wart-like growths around anus, causing considerable discomfort’. This was the kind of symptom that those visiting the Victorian Sexual Diseases Tombola were (hopefully) surprised to be presented with. And things didn’t get much better from there. In an age without antibiotics, chances of recovery from syphilis, gonorrhoea, and a whole host of other nasties were slim. By dipping into the tombola drum, visitors had assigned to them a variety of treatments that were at best useless, and at worst downright painful. Fancy a urethral cauterization? A spiked ring to wear round the penis at night? A washing out of the intimate parts with champagne? No, me neither. And that, as visitors came to realize, was the slow, tedious and repetitive nature of Victorian sexual disease treatment. As one visitor commented, ‘I’m glad I got my STI in 2018!’ 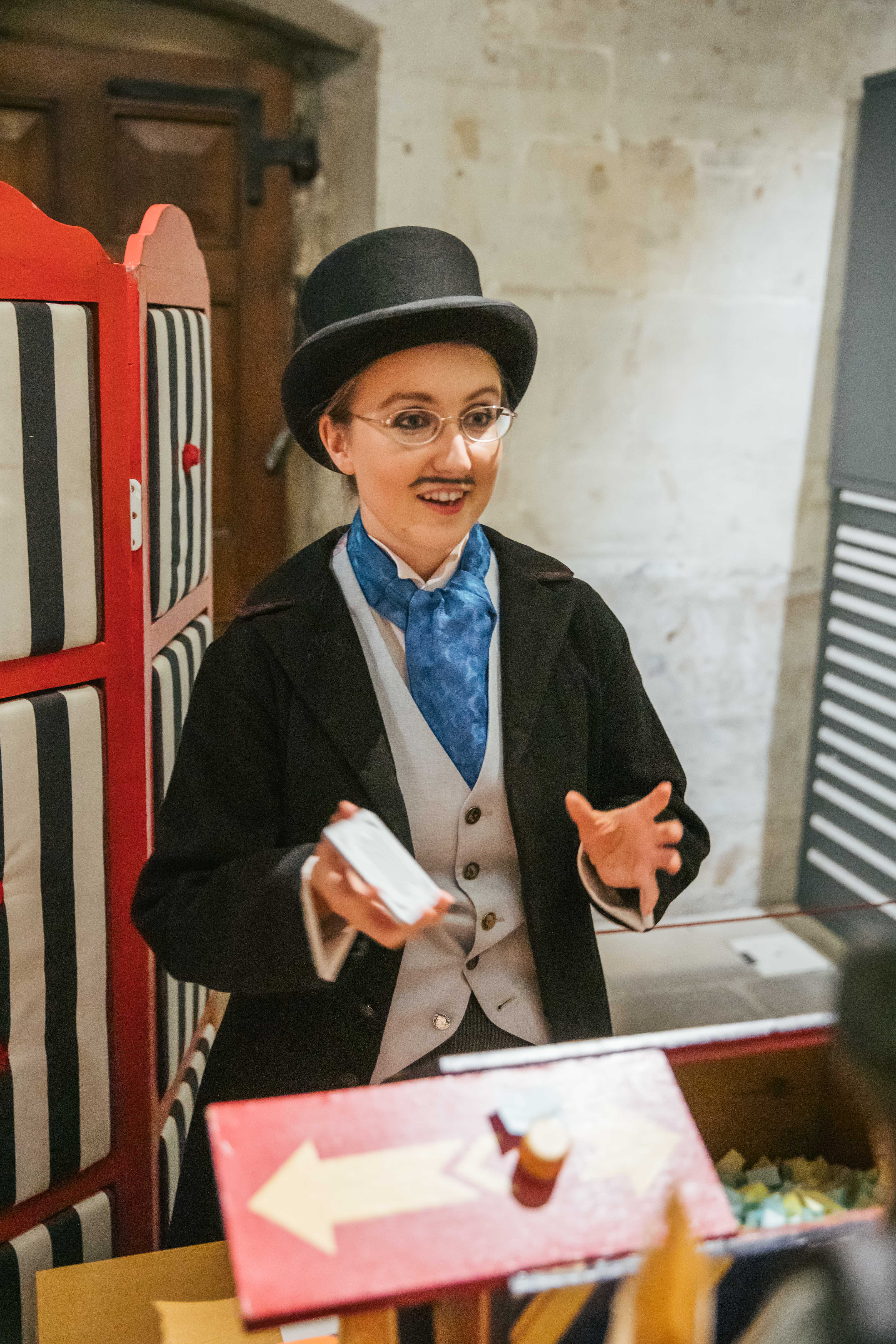 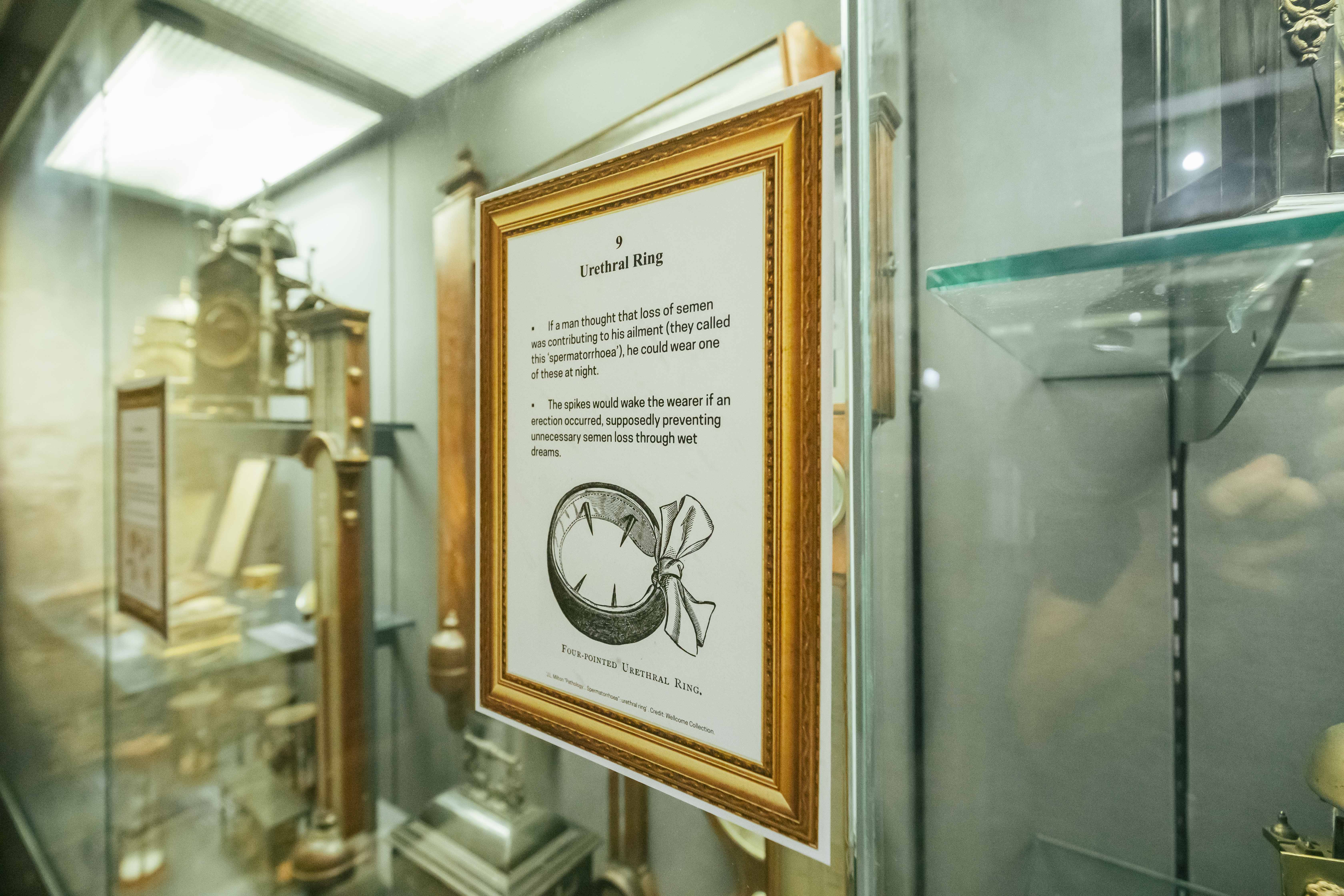 One of the more horrifying treatments for problems of a sexual nature. Photo: Ian Wallman

We also had an extremely popular Victorian photo booth, enthusiastically run by Decadent Times. (We may have got in on the action ourselves at the end of the evening...).

They've got props at the ready and poses sorted...

None of this would have been possible without a collaboration with colleagues at the Museum of the History of Science, especially Robyn Haggard: thank you for lending us your space to us - it formed the perfect backdrop for our research! For our Victorian get-up, we kindly thank the Oxfordshire Drama Wardrobe, and for our wonderful props, The Prop Factory

Most of all, thank you to our photographer, Ian Wallman, for capturing all the different facets of #VictorianSpeed so beautifully!

Thank you to everyone who came

or, in Morse Code,

PS. I got caught taking twitter photos by our fabulous photographer, Ian Wallman...