The Menace of the Barber Shop

In 1904 The Lancet considered the many risks to health posed by modern life. The collecting together of more and more people in the bustling spaces of the city was, they wrote, a perfect means of disseminating infection. ‘Everything used in common must teem with bacteria, from the cab or the omnibus to the telephone’; bus conductors held coins between their teeth before pressing them into the hands of passengers; and supposedly healthy convalescent homes crowded sickly patients together like hothouse flowers.

Even the most innocuous of places could pose grave health risks, and The Lancet was particularly concerned with one: the barber shop. This was an establishment that catered to a large number of people in quick succession, all of them in direct bodily contact with the barber and his tools. Medical concern about barber shops was evident both in Europe and America. A doctor speaking to the American Public Health Association in 1897 recalled that he had recently seen a man in his surgery whose face was ‘covered with eruptions’. After finishing his day's work, the doctor went to the barber’s and, as he waited his turn, saw that the man in the chair was his earlier patient. Leaving with some haste, he ‘resolved that his face should never again be shaved by a barber’.

We might assume that the central concern when discussing the barber’s role in the transmission of infection was the razor. Accidental nicks and cuts were an ideal way of transmitting potentially serious infection from one person to another, especially if equipment was not sterilized after each customer. Certainly, barbers were – from the end of the nineteenth century – more aware of such dangers. The Progressive Barber (1909) – a guide produced by the Wisconsin State Barbers’ Board – forcefully underlined the seriousness of taking good care with razors, asking readers how they would feel if they were responsible for the transmission of syphilis. 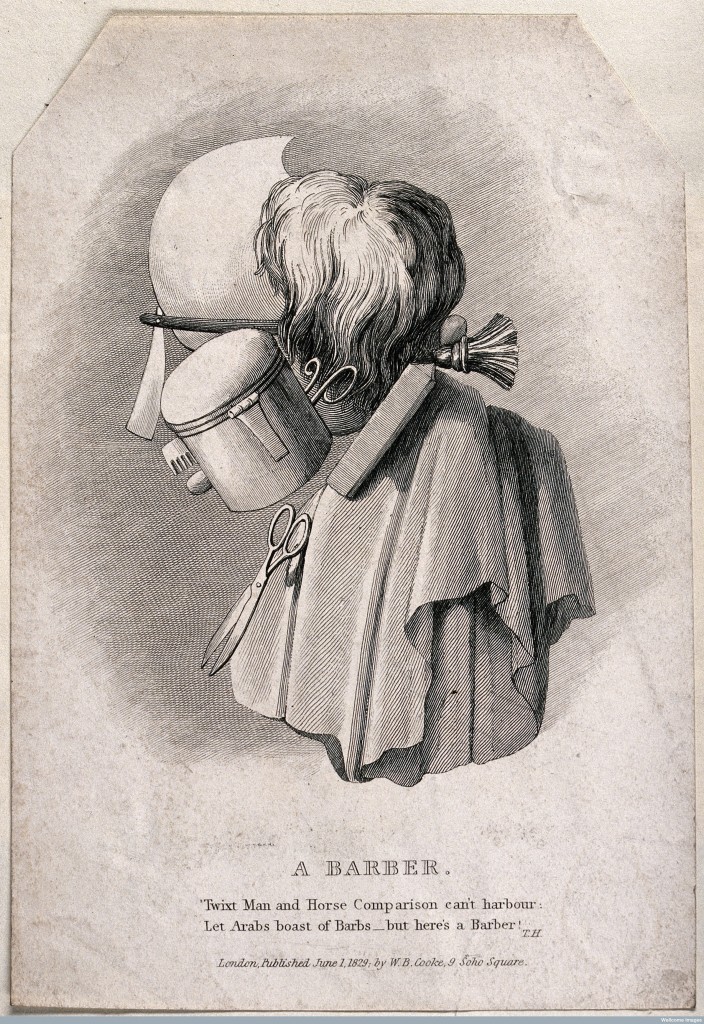 A head of a barber made up of the tools of his trade. Wellcome Library, London.

More often, though, concern centred on the less evocative implements of the barber’s trade: sponges, powder puffs, towels, combs, and brushes. These were thought to aid the spread of various skin diseases, from ‘barber’s itch’ (ringworm) to impetigo and eczema. As dermatology developed more fully as a specialism in the last quarter of the century – with the establishment of the British Journal of Dermatology in 1888, for example – there was increasing interest in the epidemiology of such conditions. Doctors repeatedly drew attention to the shaving brush as a vehicle of infection. Unlike metal implements such as scissors and razors, shaving brushes were not regularly sterilized and were often used on several customers in succession, swirled around in a common soap bowl of lukewarm water.

To reduce the risk of infection ‘the principles of the operating-room [were] extended to the barber’s shop’, echoing the barber’s older role as surgeon. Metal combs – easily sterilized – began to replace bone and celluloid; styptic pencils (to staunch bleeding from small cuts) were done away with; powder puffs were discarded in favour of cotton wool; and paper towels recommended in place of cloth. By the early years of the twentieth century, the barber’s trade had a much more ‘scientific’ air about it than it had fifty years previously. The Progressive Barber provided short biology lessons to the reader, listing conditions of the skin that signified serious disease, and setting out detailed instructions for the making-up of antiseptic solutions - the barber had become a sort of public health inspector and chemist rolled into one. The manual concluded its advice with a stern warning that signified this vision of the trade as one that was au fait with modern hygienic developments: ‘Condemned Relics of the Old-Time Barber Shop’.

For much more on the history of barber’s, and the relationship between hair and health, I recommend popping over to Dr Alun Withey’s blog.