In 1873, a speaker at the Royal Dublin Society declared that ‘many persons are inclined to deny altogether the existence of a weather-science; the triteness of the subject, viewed as a break-ice topic of every-day conversation, having … tended to conceal from them the scientific aspect of the study of weather and climate’. Here, the speaker alluded to the weather as an ever-present but under-investigated topic. Interest in the weather had a long history – the keeping of weather journals was a popular pursuit in the eighteenth century, and from 1751 the Gentleman’s Magazine published a monthly weather report within its pages. The nineteenth century, though, saw more concerted efforts to chart the weather. As travel increased, the impact of the weather on both leisure and trade became an important factor, and monitoring conditions across the globe became easier with technologies such as telegraphy. Observatories collecting meteorological data including rainfall, wind direction, and temperature were set up at Greenwich and Kew in the 1840s, and the precursor of the Met Office established in the 1850s. Alongside these government-level endeavours was an army of amateur observers, organised and advised by the Meteorological Society.

Alongside intricate measurements using a variety of instruments, there was also some appeal to ‘natural’ weather indicators, particularly in almanacs and gardener’s diaries. An unusual suggestion for a ‘natural barometer’ was offered in 1897’s The History of the Weather, which claimed that blackcurrant lozenges imbibed moisture and could ‘predict’ rain. There were also said to be ‘human barometers’. Oft recounted was the case of Captain Catlin, who was apparently able to foretell rain by the pain experienced at the site of his leg amputation. The effect of weather on the body had long been recognised. The impulse to quantification exhibited by nineteenth-century observers, though, opened up the possibility of charting such effects more carefully. From 1838, the General Register Office collected weather information alongside mortality statistics, and renewed impetus was given to such studies following mid-century cholera epidemics. Some doctors began to argue for the necessity of a national network of medical observers of the weather. In this way, harmful atmospheric influences might be recognised and eradicated, or artificial environments constructed for ailing patients. 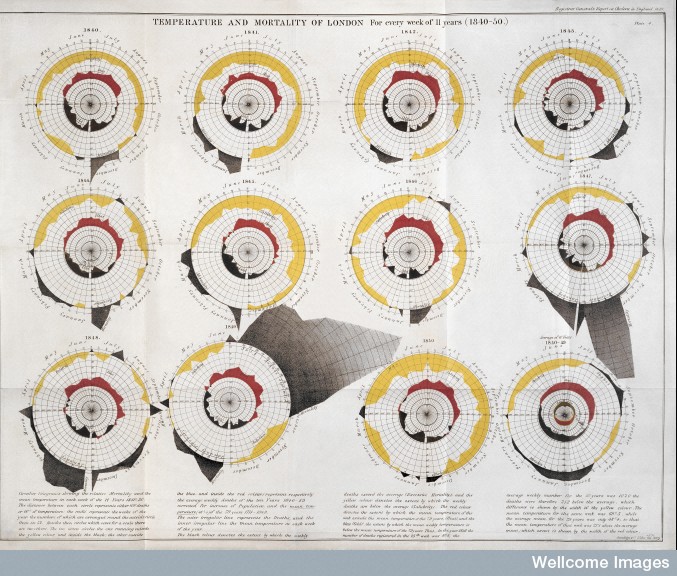 Several doctors saw the value in such an enterprise, and some were already volunteering observations to the Meteorological Society, particularly if they had a large site available to set up meteorological equipment. Hospitals or asylums often possessed open grounds where phenomena such as wind speed could be measured. A Meteorological Society inspector, checking the station set up on the Superintendent’s lawn at Caterham Asylum, was not impressed with what he saw in the 1870s, though: ‘I inspected Dr Adam’s instruments … [and] they were almost all bad’. Dr Adam was given a ticking off and a set of new, Society-approved, instruments for his observations.

In 1867, the management of Sussex Asylum decided that meteorological observations should be a regular exercise. The task fell to asylum chaplain Thomas Crallan, whose yearly meteorological reports were included in the asylum’s annual reports. Admissions and deaths were charted alongside fits and episodes of mania or melancholia. Crallan found high rates of admission in winter and summer that he attributed to the difficult circumstances that a cold winter caused for poor families, and increased sun exposure amongst farm labourers respectively. Though fits peaked in the winter and summer, Crallan noted that they occurred throughout the year. Therefore, he reasoned that the atmospheric force affecting them must be a less perceptible one than simple temperature. He turned to the lunar cycle. John Haslam had tried to chart the effect of lunar cycles on the excitement of Bethlem patients, but dismissed the idea as mere folklore. Crallan persevered in his study, however. He discovered that of 212 fits, all but five were ‘preceded or accompanied by considerable alteration in atmospheric pressure or solar radiation, or both’. Thus, he said, it was not the change of moon that was responsible for the fits, but a change in other weather conditions. It was the frequent coincidence of a changed moon and weather conditions, he said, that had led to the popular linkage of the moon and madness. He concluded: ‘so far as my own observations go, any marked change of atmospheric pressure, solar radiation, or both … is almost certain to be followed by [an] increased number of fits among the epileptics, or by a development of mania or melancholia.’

Crallan’s concern for determining a ‘cycle’ of mental distress fitted – as Niall McCrae observes in The Moon and Madness – with the late nineteenth-century reconfiguration of mania and melancholia as one cyclical illness, rather than two separate ones. Though he was undertaking his investigations in a self-consciously ‘scientific’ way, Crallan also appeared to be imagining the asylum patient as a kind of ‘natural barometer’. In the eighteenth century, an awareness of approaching weather tended to be seen as a marker of sensibility, with one’s affinity with the environment a sign of sensitivity. During the nineteenth century, a good deal of attention was paid to the ‘natural barometers’ of the animal kingdom, which tended to be the lower animals – frogs and insects. This is rather wonderfully illustrated by the ‘Tempest Prognosticator’ of George Merryweather, which predicted storms based on the movement of leeches. In imagining the asylum patient as a kind of human barometer, keen to atmospheric changes, doctors were (consciously or unconsciously) aligning them with the animals of weather folklore – a link that fitted into wider discourses about insanity, degeneration and ‘de-evolution’.

Merryweather's Tempest Prognosticator. When agitated, the leeches attempted to climb out of the jars and triggered a bell.

What became of medical meteorology, then? The attempts of bodies such as the Association Medical Journal to institute a nationwide network of medical observers proved difficult, as doctors disagreed over the specifics of how to record illness in tabular form. Nevertheless, attempts to correlate weather and mental distress continue to appear sporadically – several researchers have linked suicide and the advent of spring, for example, while moon lore continues to circulate amongst hospital emergency departments, with trepidation before a full moon and an anticipated influx of patients. Our Royal Dublin Society speaker would no doubt be pleased by this continued research into the weather’s effects, even if it does also remain the stereotypical ‘break-ice topic of every-day conversation’.

Katharine Anderson, Predicting the Weather:Victorians and the Science of Meteorology (2005).

R.E. Scoresby-Jackson, On the Influence of Weather upon Disease and Mortality (1863).