An Early Episode in the History of Electrotherapy in Japan

A recent visit to the Museum of the History of Science in Oxford saw me lingering a little more than usual in front of the electricity and galvanism section. I confess that until I began doing research for a doctoral dissertation on the history of telegraphy I didn’t care much about things electric. This is ironic, really, considering the fact that my father is an electrician. For as long as I can remember, he tried to initiate me into the mysteries of electric wires, conductors, insulators, static electricity and the like. It occurred to me that when I was really young he probably did it in a desperate attempt to keep me away from the sockets in the house, a source of constant fascination for my restless fingers. Later on, he tried to enlist my attention with the familiar refrain that, ‘You will need it one day’. I doubted it at the time, but life works in mysterious ways: as it turns out, my father was right.

Galvanism and electricity are familiar keywords for historians of science in eighteenth and nineteenth-century Britain. The amount of interest in the topic is impressive, as illustrated by numerous scientific and popular publications. There was not much electricity could not cure. A 1826 publication by M. La Beaume, ‘Medical Galvanist, Surgeon-Electrician, Consulting Ditto to the London Electrical Dispensary, Gratuitous Electrician to the Bloomsbury and Northern Dispensary, etc.’ advertises the author’s ‘new galvanic batteries’ and provides a concise survey of the medical applications of galvanism. We learn that galvanism affords relief from a great variety of ailments, among which are disorders of the digestive organs, of the head and the nervous system, ‘cachectic diseases’, diseases of the skin, gout, rheumatism, blindness, deafness as well as diseases ‘peculiar’ to one of the sexes. Of particular interest is the fact that La Beaume promotes galvanism as a safer and more beneficial substitute for mercury-based treatments. As he puts it, ‘Galvanism, skilfully administered, seldom requires the aid of any secondary agent to supply its deficiency, and never to remove injurious effects; it is not at variance with any constitutional temperament, nor can it superinduce any disease: in its application it is perfectly safe, pleasant, direct, and often instantaneously effective; it gives the patient no personal inconvenience whatever; and may be exhibited at all times to both males and females, of all ages and at all seasons of the year’ (p. 199).

But Europe is not the only place where electrotherapy attracted a considerable degree of attention from both scientists and the general public. A similar example comes from Japan, where the first references to electrical devices and their efficacy in the treatment of various diseases date from the Edo period, in the eighteenth century. Unsurprisingly, early Japanese encounters with electricity were mediated by Dutch electrical devices and texts, the only European country which was allowed to trade with Japan at the time. The first electrical device reached Japan via a merchant ship which sailed into Nagasaki in 1753, and took the form of a gift for the Tokugawa shogun. The earliest description of an electrical appliance, known in Japanese as erekiteru, can be found in the 1765 work of Gotō Rishun, Oranda banashi or Stories of Holland, which also contains references to its use in the treatment of diseases. 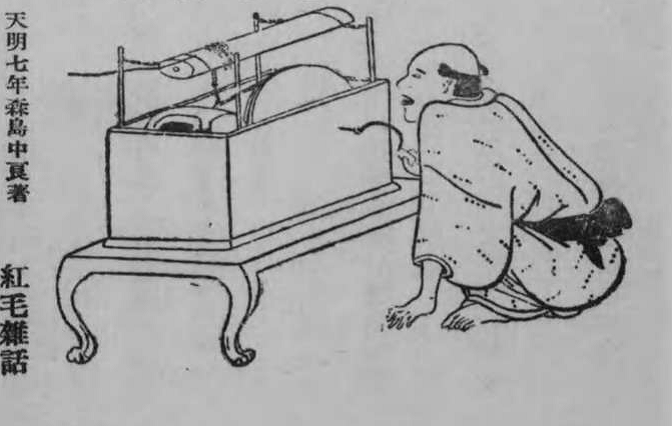 But it was Hiraga Gennai (1728-1779), a rōnin or masterless samurai born in the present-day Kagawa Prefecture on the island of Shikoku, who became famous for constructing the first electrotherapeutic device in Japan. Hiraga, a student of rangaku or ‘Dutch learning’, read Oranda banashi and, like many of his contemporaries, became fascinated with the ‘curious’ electrical appliances created in Europe. In 1776, after several years of trial and failure, he succeeded in repairing a discarded Dutch electrical apparatus which he had acquired during a visit to the port-city of Nagasaki.  In rather familiar fashion, if we consider the similar trajectory of such devices in Europe and even in India, Hiraga’s success was followed by public demonstrations of his apparatus; he also offered treatment to select clients and built other devices which were either sold or presented as gifts. Hiraga passed away in unfortunate circumstances only three years after constructing his electrostatic generator, but there are references to this device in his work Hōhiron Kōhen [On farting, Part 2], a biting satire of Confucian learning and high culture. Published in 1777, the work describes the erekiteru as a device which helps to ‘remove the heat (hi, lit. fire) from the body and cures diseases’. 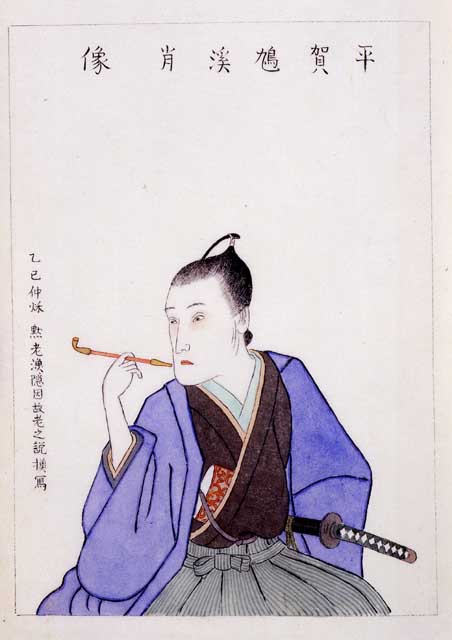 Incidentally, Hiraga’s wide-ranging interests did not stop at Western science and technology. He was also a prolific writer and painter, as the above reference to his satirical work suggests. In addition, he had an impressive knowledge of medical plants, having engaged in the study of materia medica under the renowned hōnzogaku scholar Tamura Gen’yū. His contribution to the study of natural history is demonstrated by the publication, in 1763, of a six-volume work entitled Butsurui hinshitsu [On the Distinction of Species]. Among his other activities were the construction of a thermometer, his surveys of mining and experiments with new mining techniques but also his attempts to find domestic sources for pottery and wool which would ameliorate Japan’s reliance on imported commodities. In 2003, the Edo Tokyo Museum organized a special exhibition to celebrate Hiraga’s multi-faceted life as an engineer, naturalist, men of letters and artist. A replica of his erekiteru is currently on display at the National Museum of Nature and Science in Tokyo. 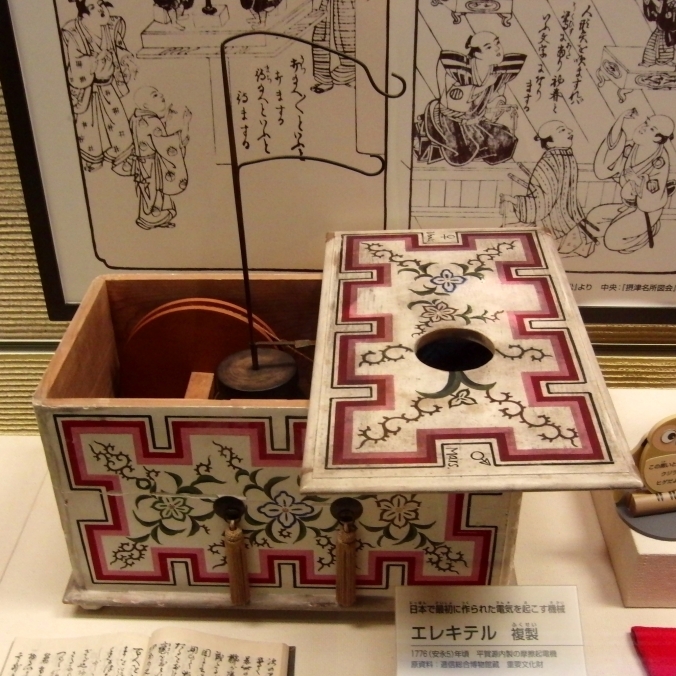 Replica of Hiraga’s erekiteru at the National Museum of Nature and Science, Tokyo (Wikimedia Commons)

Akiko Ito, “How Electricity Energizes the Body: Electrotherapeutics and Its Analogy of Life in the Japanese Medical Context”, in Feza Günergun and Dhruv Raina (eds.), Science between Europe and Asia: Historical Studies on the Transmission, Adoption and Adaptation of Knowledge (Dordrecht: Springer, 2011), pp. 245-58.