Reading Victorian periodicals is one of the most important aspects of our work on the “Diseases of Modern Life” project. Each of the project members is responsible for researching two thematic strands as well as our own book projects. In my case the strands are “Diseases of the Professions” and “Diseases of Finance and Speculation”; Jennifer is looking at “Addiction” and “Climate and Health”, while Melissa covers “Education and Over-pressure” and “Nervous Diseases and Phobias”. The range of periodicals we examine is quite broad, from popular magazines such as Belgravia, Blackwood’s Edinburgh Magazine and Leisure Hour to more specialized publications like the Medico-Chirurgical Transactions, the Sanitary Record and the Medical Times and Gazette. My own list of periodicals-to-read also includes a good number of technical publications such as The Electrician, association journals like The Postal Clerk’s Herald as well as medical journals published in British India (the Madras Quarterly Journal of Medical Science, the Indian Annals of Medical Science, etc.) which so far have not received the scholarly attention they deserve.

Needless to say, nineteenth-century periodicals are a treasure trove of information for historians. My recent survey of Leisure Hour provided fascinating insight into various aspects of the working lives of Victorian clerks, from the manual skills and work ethics they were required to possess to the stress of promotion and overwork and even the hassle of commuting by omnibus. The drudgery and mental strain of clerical work are familiar themes of Victorian writing. Take the example of the General Post Office located in St Martin’s-le-Grand, where letters, newspapers and other postal matter were sorted and stamped by “active, earnest-looking, time-begrudging beings”, who laboured incessantly under the supervision of taskmasters and that ubiquitous marker of the modern temporal order, a “large, clear-faced clock”. The drive towards efficiency and speed was visible not only in the orderly design of the office, where men sat at “long rows of tables, desks and shelves”, but also in the rigid differentiation of tasks and the seemingly uninterrupted flow of work. Manual dexterity, rapidity, concentration, precision and endurance were only some of the many qualities demanded of a postal clerk:

This task [stamping the letters] is confided to a nimble-fingered gentleman, who seems inclined to back himself against any steam-engine under the roof, past, present, or to come. Placing a number of letters before him in an upright position, with the postage head in the upper right corner, he strokes them down gently but rapidly, one by one, under his right hand, which holds the stamping die, and comes down with unerring precision and bewildering rapidity full upon the label. A hundred heads are damaged in a minute by this skilful operator … and the only partial break that occurs in his labour is when a letter either wants a head, or contains it in the lower left hand, instead of the upper right-hand corner. Dipping the die on to the ink-brush or stamping a paper at intervals, that stands at his side, to keep a rough record in twenties or fifties of the letters passing through the office for that night’s mail, are eccentric diversions of the head-blotting duty, performed almost too quickly to strike the eye.

The amount of postal matter handled by the Post Office was enormous. Alone in 1858, an impressive 523 million letters, 71 million newspapers and 7.25 million book packets were delivered in the United Kingdom. That printed matter circulated extensively is amply demonstrated by such figures. But who were the readers of this vast empire of the printed word? (And empire it was, both literally and figuratively, if we consider the range of circulation of some of these publications: in 1872, the Madras Monthly Journal of Medical Science subscribed to The Lancet, the Dublin Journal, the Medical Press and Circular, the British Medical Journal, the Edinburgh Medical Journal and the Pharmaceutical Journal, not to mention a few other Indian and French publications).

While Victorian periodicals offer numerous insights into the production stage of newspapers and periodicals, familiarizing contemporary readers and eager historians with the nature of editorial duties, the adventures of war correspondents like William Howard Russell and the health hazards to which compositors were exposed, it is less often that we get to find out what happened to these publications in the stages of circulation and consumption. The readers are, more often than not, an elusive entity that reaches us through the paratext of a long-forgotten newspaper, the occasional correspondence and lists of subscribers published in the press or through the mediating power of the Victorian literary imagination. It is thus that we find out that a copy of the Asiatic Mirror and Commercial Advertiser published in Calcutta and dated 7 March 1798 was "[f?]or Ralph Luke Esq Longford Shropshire" or  that the daily routine of a counting-house clerk included “read[ing] his letters at breakfast … and look[ing] at the newspaper for a little while after dinner” (Mark Rutherford, The Autobiography of Mark Rutherford, 1889). Also, that Amy Reardon was attracted to “solid periodicals” which targeted the “educated, but not strictly studious, persons, and which form[ed] the reservoir of conversation for society above the sphere of turf and west-endism” (George Gissing, New Grub Street, 1891).

But visual evidence of readers and especially of their reading environments is hard to come by, which is why discoveries like the images below are particularly exciting for the 21st-century historian. More so because they testify to the ability of the Victorian printing press to forge communities of readers not only across territorial boundaries, but also across temporal ones. My office (and indeed, my home) is a far cry from the affluent-looking homes of some of the Leisure Hour readers and my access to periodicals is often mediated by technologies the Victorians could have only imagined, but it is intruiging to think that, a century and a half apart, we are actually sharing the experience of reading the same paper.

Portraits from a series of “Newspaper Reading Types” published in 1893 by the English Illustrated Magazine.

By the turn of the century, photography takes the reader into the (rather affluent) homes of some of the Leisure Hour subscribers. These images seem to have been selected from among entries submitted to a photography competition. 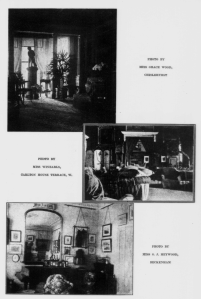