This is a guest post by Agnes Arnold-Forster, a third-year PhD candidate in the History Department at King’s College London. Agnes's research, funded by the Arts and Humanities Research Council, looks at cancer in Britain, from 1792 to 1914. She is an editor of the history of sexuality blog Notches. 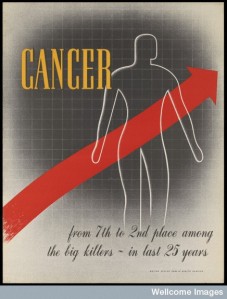 Woods Hutchinson (1862-1930) was an English physician who trained as a doctor in the United States. As well as a successful pathologist, clinician, and public health practitioner, Hutchinson was a prolific writer, covering evolution, comparative pathology, exercise, civilization, and war in his wide-ranging publications. In 1899, the Contemporary Review published an article by him, thick with metaphorical allusions and polemic, entitled ‘The Cancer Problem: Or, Treason in the Republic of the Body.’ Here, Hutchinson condensed to thirteen pages the diverse and fraught anxieties that attended cancer in late-nineteenth-century Britain.

The collection of vital statistics in Britain from the 1840s onwards suggested to troubled observers that cancer’s incidence was increasing exponentially. This perceived ‘cancer epidemic’ captured the medical and lay imagination, and promoted fierce debate in the pages of medical journals, general interest publications, and in parliament. Hutchinson was thus not alone in lamenting its increase ‘at such an appalling rate.’ He posed cancer as ‘the riddle of the Sphinx for the twentieth century’, and positioned the disease as an unintended consequence of civilisation and progress.

Roy Porter has called cancer ‘the modern disease par excellence’ and Siddhartha Mukherjee has described it as ‘the quintessential product of modernity’, and we tend to think of cancer as closely tied to the twentieth century, and its increase as a product of recent changes in ways of living. Thus, cancer is mostly absent from histories of the nineteenth century. However, as Woods Hutchinson demonstrates, people were expressing concerns about cancer and modernity in the nineteenth century, and saw it as a product of changes to Victorian lifestyles and environments.

The language of the text is rich in metaphor and analogy, and Hutchinson made use of cancer to explore contemporary social and political anxieties. The late-nineteenth- and early-twentieth-centuries were awash with debates over national decline and degeneration, and commenters such as Gustave Le Bon were particularly apprehensive about the threat of social disorder and unrest in the context of economic depression and the expanding franchise. Hutchinson interpreted cancer in these terms, calling it ‘a rebellion of the cells’, or ‘an imperium in imperio’.  He was explicit about the connections between cancer’s threat to the individual body, and the dangers posed by social unrest to the national population: ‘In the body-republic, where we have come to regard harmony and loyalty as the almost invariable rule, we suddenly find ourselves confronted by anarchy and revolt.’ In general, Hutchinson drew metaphorical links between one body, and the collective bodies of the country: he referred to the ‘blood- and lymph-road’, called the ‘central organs’ Rome, and described cancer as a ‘ruthless march upon the body-fortresses.’

Cancer, ‘the deadliest and most uncontrollable of known diseases’, was metaphorically tied to the decline of the late-nineteenth-century nation. An increase in cancer incidence was taken as evidence of the waning power and significance of Britain and its empire in the fin-de-siecle. Hutchinson described cancer as ‘emphatically a disease of senility, of age.’ If it was a malady that peculiarly affected those in the twilight of their years, it was also a disease that manifested national and imperial decline. Cancer was understood to affect organs that had begun to ‘atrophy’ (breasts after the menopause, for example), and to flourish in countries that were diminished in influence.

Cancer was a disease tied to the late stages of civilisation. It was produced by progress, and societies that were understood as less developed, or less civilised, were thought to be far less vulnerable, even immune, from cancer. Hutchinson argued that cancer was a disease that peculiarly affected white races. He suggested that the frequency of cancer ‘in the negro’ was ‘less than half the white race in the United States’, and claimed almost complete absences from ‘savage and barbarous races generally.’ This hierarchy of cancer-susceptibility was only further inscribed by the links he drew between civilised peoples and domesticated animals, and between wild animals and ‘wild’ peoples. Using evidence from London Zoo, he suggested that cancer in wild animals was ‘practically unknown.’

Cancer was, therefore, a disease of late-nineteenth-century modernity. It was seen as both a product of social and biological progress, and a consequence of national and imperial decline. The nation-state mirrored the processes of the natural body. It grew, advanced, and improved, before beginning an inevitable and irreversible decline, only for life to be brought to a close through a catastrophic rebellion of cells, or rather population. This trajectory was only available to those nations/individuals who achieved both longevity and modernity. Thus, societies and communities that were situated on lower rungs of the Victorian racial hierarchy were vulnerable to neither cancer nor collapse. As Hutchinson suggested, ‘Cancer is the price paid for longer life.’ High cancer incidence was, therefore, both an indicator of civilisation, and the mechanism by which that civilisation would fall apart.