The Tenth Annual Conference of the Newspaper and Periodical History Forum of Ireland, held at the University of Newcastle on November 10-11, 2017, addressed a topic that no doubt resonates with many contemporary discussions about journalism in the post-truth era: ‘Fake News! An Historical Perspective’. The conference featured a number of stimulating panels which engaged with the issue of ‘fake news’ in various historical and geographical settings—‘Defamation and sensationalism’, ‘News manipulation, propaganda and radicalism’, ‘“Fake news” and Ireland’ and ‘“Fake news” and Northern Ireland’—along with two keynote addresses by Prof James Curran, on ‘The moral decline of the British press’, and Prof Aled Gruffyd Jones, on ‘Is news fake? A long view’. Rather than a conference report, this post is a summary of the insights I gained from this two-day event (together with a long list of questions to ponder in my future research on media history!).

‘Fake news’, as many speakers pointed out, is by no means a new phenomenon: indeed, the question of the ‘integrity’ of news, as Aled Gruffyd Jones fittingly put it, is as old as news itself. The phrase ‘fake news’, however, is of a more recent pedigree and has exploded into public consciousness in the aftermath of the 2016 US presidential elections, when the question of how fabricated news stories widely circulated on social media impacted on the actual outcome of the elections became the subject of much public and scholarly debate. As Tamara Hunt reminded us in her talk, there is a linguistic dimension to consider, since the adjective ‘fake’ was seldom used before the eighteenth century. At least until the end of the nineteenth century, if not even later, if we are to believe the newspaper and periodical files I examined in my own research, it was more common to speak about ‘false news’, ‘false reports’ or ‘false telegrams’. An example of how the term was used in the seventeenth century comes from James II of England’s ‘Proclamation to Restrain the Spreading of False News’, issued in Whitehall on 26 October 1688, which refers to ‘evil disposed persons … [who] make it their business, by writing, printing, or speaking, to defame our government with false and seditious news and reports’. As this and other examples from that period demonstrate, ‘false news’ was often described as a form of ‘evil’ talk. The nineteenth century also had its share of fabricated news, with the Great Moon Hoax of 1835, in which the New York-based newspaper The Sun published a series of articles claiming that life had been discovered on the Moon, being perhaps the most notorious.

Historically, the contexts in which ‘fake news’ cropped up were many: sometimes as part of political and military crises, commercial rivalries or advertising plots; other times in sensational reports about celebrities or murders; yet others in attempts to reconstruct Soviet cities in the aftermath of WWII—Robert Dale’s pertinent observation that analyses of ‘fake news’ should also account for its ‘silences’ is worth emphasizing here—or the colonial government’s plans to control the flow of official intelligence to the press in British India.

As is often the case with definitions, the task of establishing what counts as ‘fake news’ is a daunting one. Furthermore, there are indications that contemporary definitions of the term might be different from those employed in previous literature. In a recent survey of 34 academic articles, Tandoc, Lim and Ling identified six main ways in which the term has been employed, namely as news satire, news parody, fabrication, manipulation, advertising and propaganda. They also pointed out that these definitions were based on the ‘levels of facticity and deception’ of such news items and that the two main motivations that underpinned the fabrication of false news stories were financial and ideological. [1] Indeed, the papers presented at the conference tended to conceptualize the universe of ‘fake news’ as a broad entity: on one hand, there was news that was clearly and intentionally fabricated, with the falsification of commercial intelligence and war telegrams being two common examples in the eighteenth and nineteenth centuries. On the other hand, there was news that was based on fact or at least a nugget of truth, but on which journalists, state authorities and other social actors tried to put a certain spin in order to promote a particular perception that would favour their interests. The intention to deceive was present, but the level of facticity was higher than in the former type of ‘fake news’. By contrast, scholars who have examined the recent proliferation of ‘fake news’, especially in the United States, have argued that reports that are ‘slanted or misleading but not outright false’ do not fit the bill, since they ‘filter’ rather than ‘distort’ reality. In this understanding, ‘fake news’ is that which is ‘intentionally and verifiably false’ and is related to two particular types of media bias: fact bias and framing bias (as opposed to issue bias and ideological stand bias which are regarded as filtering reality, not distorting it).[2]

There is, however, another dimension to consider, namely that it might be more productive to conceptualize ‘fake news’, as Aled Gruffyd Jones suggested in one of his interventions, as a ‘complex process’ rather than a particular event. This perspective has the benefit of bringing into focus not only the contexts in which ‘fake news’ is fabricated and disseminated, but also how the audiences themselves respond to and engage with it.  Put differently, what function does ‘fake news’ play in society and what does it teach us about it? For example, is ‘fake news’ used to undermine the credibility of rival newspapers, to defame the press as an entity or, like in the colonial context of India, to delegitimize local forms and practitioners of journalism? If ‘fake news’ is strategic, as James Curran pointed out in his keynote address, what role does it play in the current erosion of trust in communication media and what are the broader social and political consequences of this phenomenon? Is ‘fake news’ used to manufacture public opinion and if so, what role do emotions like anger play in such processes? Finally, is ‘fake news’ a revolt against Enlightenment rationality and a ‘discourse of chaos’? As some of the conference speakers pointed out, attempts to address these questions must also engage with the role of newspapers in society and how this has been conceptualized by journalists, political actors and other members of the public. Are newspapers simply vehicles of information or are they also organs of education? How might such understandings of a newspaper’s role in society collide with an understanding that emphasizes its entertaining value? Is the press a form of cultural performance, as it might be argued was the case in post-WWII Soviet Union, when newspapers routinely published false information about the state of urban reconstruction?

Understanding how audiences engage with ‘fake news’ is important because it draws attention to the broader political and cultural ramifications of this phenomenon. It can show, as Abigail Rieley discussed in her talk, that untruth can live and linger on long after it entered the public domain and draw attention to the role intertextuality and orality might play in the afterlives of ‘fake news’. The issue of agency, as some speakers emphasized, is essential when dealing with the question of audience response, because the realization that a piece of news is fake has the potential to effectively undermine its power. ‘Fake news’ that is recognized as such by its readers ceases to be ‘fake news’ and becomes fiction. Information and media literacy—in other words, training people to recognize ‘fake news’, for example by teaching them to think critically about the sources of news and the contexts in which it was created, the manner in which journalism has developed and changed historically, how to cope with a scenario in which many of the traditional gatekeepers who filtered information for the audiences have disappeared, etc.—is an important step in grappling with its proliferation. However, in and by itself, this might not be enough to cure the broader social pathology of which ‘fake news’ is only a symptom.

A full programme of the conference can be found below. 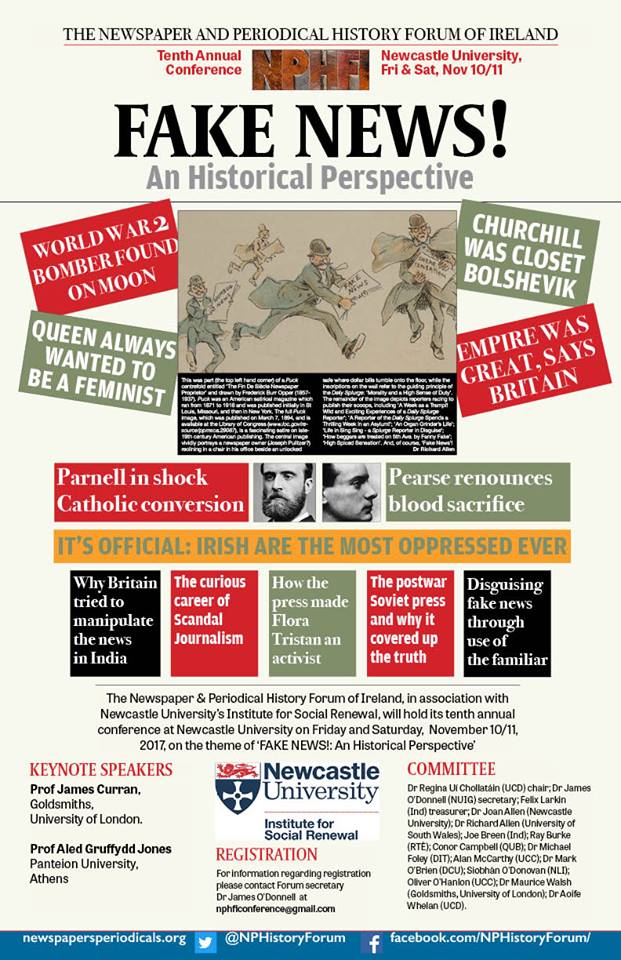 Máire Cross                 ‘Sensationalism and satire: the role of the press in the making of Flora Tristan as a political activist’.

Abigail Rieley             ‘The Lingering Lie – how the London Evening Standard’s reporting of a Victorian Irish murder played politics with innocence and guilt’.

Robert Brazeau           ‘Fake News in the Nineteenth-Century: The Curious Career of Scandal Journalism’

Christopher Eaton       ‘Chaos and Influence: The Case of Watty Cox’

Roseanna Doughty     ‘“The door is still open for peace. But only just”: British Press Coverage of the Northern Ireland Peace Process’.