Containing Our 'Multitudes' and Negotiating Gastrointestinal Health in the Modern World

‘Even when we are alone, we are never alone,’ writes award-winning science writer, Ed Yong, in his new book I Contain Multitudes. ‘We exist,’ he argues, ‘in symbiosis […] every one of us is a zoo in our own right—a colony enclosed within a single body. A multi-species collective. An entire world.’⁠1 His new book on the flora and fauna inside us, collectively known as our microbiota, grapples with the myriad ways in which organisms live in symbiotic relationships with each other and with the microscopic world. 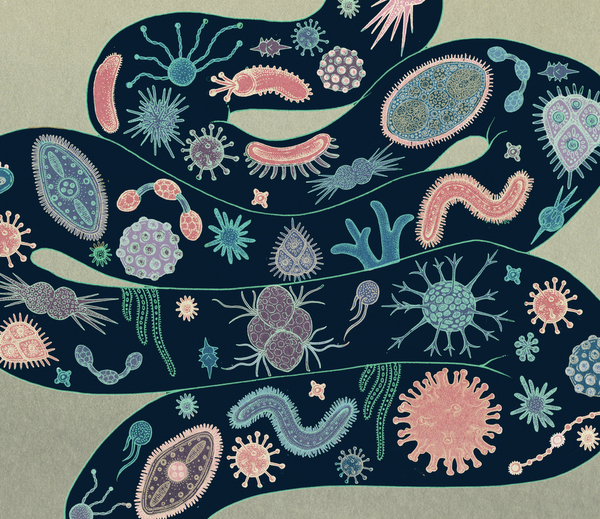 He intersperses zoological road trips with historical anecdotes, intermediate biology, and experimental statistics, to shed light on the burgeoning field of microbiome studies and what it might mean for our future. This new biomedical research specialism has, in the last 10 years or so, posited links between our gut microorganisms and everything from the efficacy of cancer treatments, vulnerability to diabetes, and responsiveness of our immune systems, to inflammatory bowel disorders, autism, and anxiety.

Recent scientific studies have demonstrated that our unique microbiomes have an impact on our somatic, immune, and even psychiatric health. However, recognition of the centrality of our gastrointestinal health to our physical and emotional wellbeing is far from a modern phenomenon. Throughout history, medical, popular, and literary writers alike have all recognised the significance of diet and digestion—from Aristotle’s conflation of ‘normal digestion’ with health⁠2 to George Cheyne’s English Malady (1733) to William Beaumont’s Experiments and Observations on the Gastric Juice (1838). Gout, dyspepsia, and indigestion fill the pages of fiction from Shakespeare to Dickens, and this is particularly apparent in the literature of the nineteenth century; Sir Leicester Deadlock in Bleak House (1853) suffers from gout—‘a demon of the patrician order’, while Byron’s Don Juan (1823), William Gilbert’s The Mountebanks (1892), and Robert Bulwer-Lytton’s Lucile (1860) all make mention of indigestion. Indeed, the nineteenth century saw a perhaps exponential increase in narratives concerned with digestive health. The interdependence between disease and the gastrointestinal region was increasingly being highlighted, and the connections between digestion and the emotions were being repositioned in relation to the demands and requirements of modern life. Physician J. Milner Fothergill, for example, argued that town life bred dyspepsia, producing petite, over-sensitive women, who read novels and couldn’t eat wheat.⁠3  A damning indictment of modernity—and of at least half the academics I know. The central importance of gastrointestinal health within the mind-body system was continually developing throughout the century in dialogue with burgeoning modernity and its scientific paradigm shifts.

Germ theory and the development of immunology with its martial metaphors and emphasis on personal and public hygiene, had a lasting legacy, ostensibly leading, in the twentieth century, to the idea that humans are ‘too clean’—encapsulated by the many misconstructions of Prof. David Strachan’s ‘hygiene hypothesis’ in the 1980s. This was the idea that increasing incidences of allergies and autoimmune disorders might be traced to our avoidance of pathogens in childhood. In reality, it is the lack of exposure to vital microbial symbioses that just as crucially underpins this increase. Indeed, recent scholars have suggested a renaming of this phenomenon to better reflect its intended meaning.⁠4 As Yong argues, we need to disabuse ourselves of the reductive categories of invading “bad” and resident “good” microbes,⁠5 ushered in by the warfare-inflected discourses of late nineteenth century immunology. However, although germ theory certainly did inspire a more military approach to understanding disease transmission, explorations of gastrointestinal health in the nineteenth century from an interdisciplinary perspective reveal a more complicated understanding of health.

Medical treatise and periodical essays in the nineteenth century are replete with discussions of the ‘war’ against disease—a metaphor that extends beyond the immune system to encompass the scientific ‘battles’ of medical research—however, there is also a sense of symbiosis. Yong’s seemingly modern notion of a ‘multi-species collective’ sits alongside Henry Gabbett’s notion of microorganisms as ‘invisible guests’,⁠6 M. Easter-Ross’s more democratic ‘joint tenants’⁠7, or the Saturday Review’s proposition that ‘every man is a mere firm, a Homo & Co.’⁠8 H. G. Wells’s 1898 novel, The War of the Worlds, reveals the power of a hard-won symbiosis when the Martians are killed by bacteria—our ‘microscopic allies’. 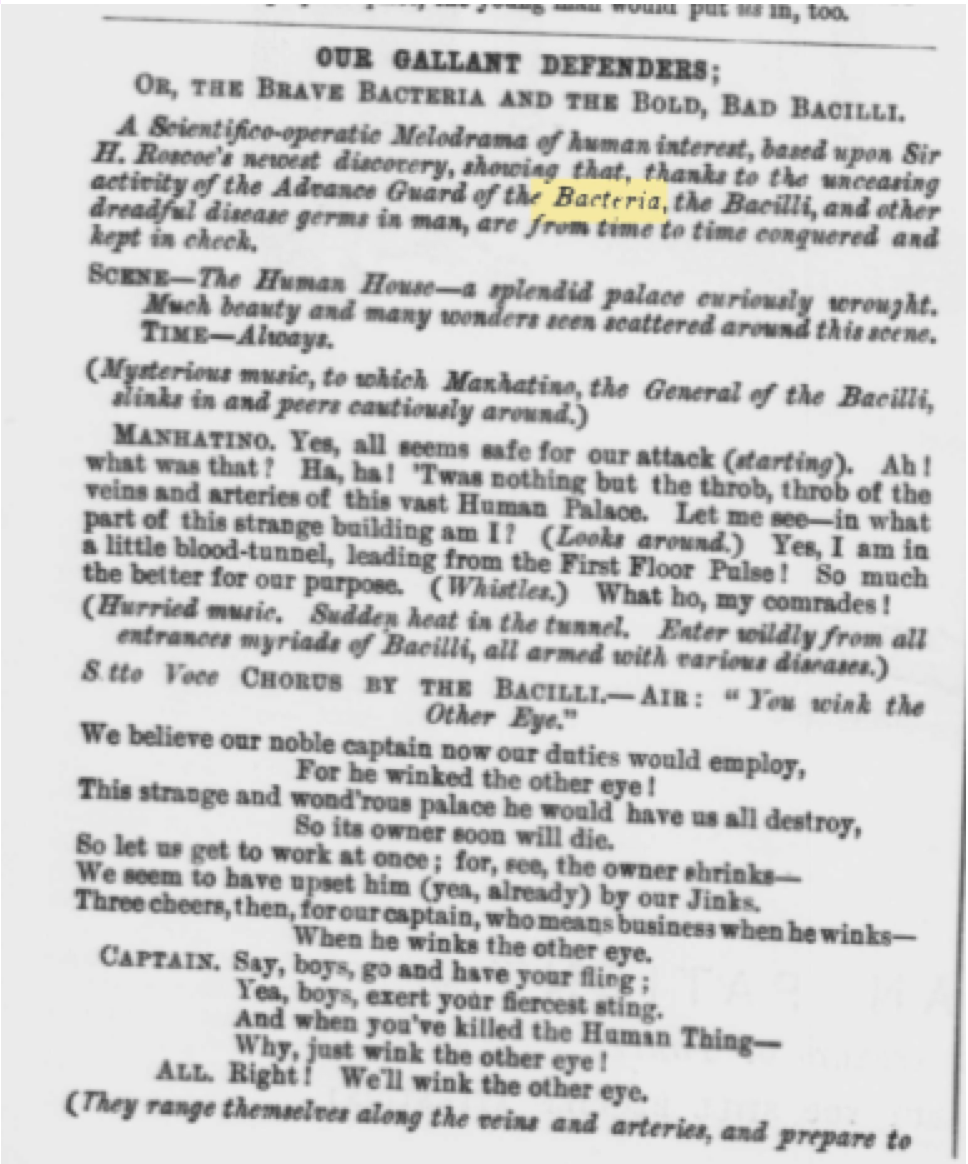 'Our Gallant Defenders; or the Brave Bacteria and the Bold Bad Bacilli', Judy, or the London Serio-Comic Journal, 3 Sept 1890, p.116.

As Wells’s narrator explains, ‘by the toll of a billion deaths man has bought his birthright of the earth’.⁠9 This blurs the language of microbe morality suggesting that while they are ‘germs’ that we ‘struggle’ against, they might also be friends and allies against invading species. Rather than the taxonomically “good” and “bad” bacteria of the modern probiotics industry—or indeed nineteenth century satirical plays like ‘Our Gallant Defenders: the Brave Bacteria and the Bold Bad Bacilli’⁠10 (1890)—Wells’s story posits a more fluid understanding of microbial-human interactions, in line with Yong’s call for considering terms like ‘parasitic’ or ‘pathogenic’ as relative and context-dependent, rather than tied to taxonomy.

Yong argues that terms like this are more akin to states of being, feelings, emotions, or behaviours: ‘they’re adjectives and verbs, rather than nouns, they describe how partners relate to one another.’⁠11 This calls for a reconsideration of these organisms in a perhaps counter-intuitive way. If we’ve learnt anything from discussions in PopSci, we’ve learnt that anthropomorphising microorganisms is problematic. In the nineteenth century, parasitologists framed parasites as small animals in order to legitimise their specialism. As Nobel prize winning parasitologist Ronald Ross argued,

'They are none of your vulgar vegetable bacteria [...] they are animals and not vegetables.'

He even suggested that unlike ‘antiquated’ bacteria, they possessed a willingness to 'show themselves and be admired’.⁠12 This kind of rhetoric is widely agreed to be damaging and confusing for the public understanding of science. However, Yong’s book suggests to me that there might be mileage in considering a more anthropocentric heuristic. In his book, he avoids terms like ‘good’ and ‘bad’, but employs the equally problematic frameworks of ‘hero’ and ‘villain’. The difference appears to be one of semantics. As we know from popular culture’s long-standing love of superhero films (recently brought to you by Marvel, DC, and J.J.Abrams), the backstories usually reveal that the villain and hero have more in common with each other than they think—and usually very complicated relationships with the traditional frameworks of morality. They suggest that there is no such thing as ‘intrinsically’ good or bad people, only good or bad behaviours. Surely this is a more anthropocentric outlook than any? While microbes do not have morals, or feelings, or concepts of evil, we cannot help but narrativise their actions. And while Yong takes pains to point out that microbes are simply doing what they can to live and multiply, the symbiotic relationships they have with us—whether mutualistic or pathogenic—underpin our entire existence. It might be a bad idea to impose our own concept of ethics on these organisms, but it might be equally damaging to ignore the reality that behaviours and partnerships are context-dependent. As we’ve learnt from recent studies into the efficacy of helminths in treating inflammatory bowel disorders, one person’s parasite might be another person's beneficial symbiont.⁠13