Be Still My Beating Heart

One frequently made observation about the nineteenth century is that it was marked by a number of breakthroughs in medicine and the sciences which revealed forces that shape humanity – as individuals and as a species – whose existence was previously unsuspected. Our understanding of ourselves was changed at a fundamental level by the new knowledge of these hidden operations that had been invisibly at work within us since prehistory. Darwin’s theory laid bare the contingency of our existence in the struggle for survival, while Freud pointed to the seething chaos of the unconscious. Man’s inner world was suddenly mappable, yet worryingly more obscure at the time. Untold volumes have been devoted to the defining shifts these two theories brought about and the anxieties they produced, observable in seemingly every facet of life, the subject’s vastness and complexity defeating any meaningful attempt at summary. Easier to take in at a glance is the somewhat less epochal advance that accomplished a similar kind of inside-outing: the advent of the stethoscope.

Credit for the invention goes to a young French physician René Laennec, who spent the early decades of the nineteenth century investigating the correlations between his patients’ bodily sounds and their medical conditions. His research initially took the form of a long and painstaking process of carefully matching the sounds he detected during his assessment of patients with the physical changes in diseased organs that could he observed during their subsequent autopsies, Laennec evidently subscribing to the “eggs for omelettes” theory of medicine. He stumbled upon the device for which he is remembered when, in 1816 while struggling to examine an obese girl with symptoms of heart disease, Laennec rolled up a piece of cardboard, applied one end to his patient’s chest and the other end to his own ear, thus creating the first stethoscope. Elaborating on this concept to design his wooden, cylindrical tube, pictured in use here at a Parisian hospital, Laennec published in 1819 a 900 hundred page treatise on the art of mediate auscultation, filled with descriptions of the various normal, abnormal, and pathological sounds he had detected through use of the stethoscope and the diseases they signified. 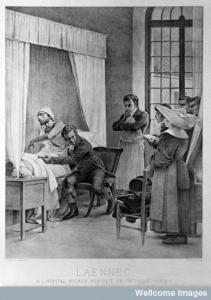 Laennec using his stethoscope at the Hospital Necker

There were inherent difficulties, however, in describing the various sounds the stethoscope made audible that were to tax Laennec’s metaphoric reserves to their utmost. While some descriptions where relatively straightforward – the rush of wind through a small orifice, for instance – others were decidedly outlandish. He likened a particular lung condition to the creaking of the leather of a new saddle, and yet another to the sound produced by stroking the head of a cat while the animal is purring.

It was not only doctors who were confronted by confusion brought about by the new clarity of insight the stethoscope provided. As Blackwood’s Edinburgh Magazine noted in 1847, the stethoscope had become a focal point of patients’ hopes, anxieties, dread, and horror:

The stethoscope has long ceased to excite merely professional interest. There are few families to whom it has not proved an object of horror and the saddest remembrance, as connected with the loss of dear relatives […] As an instrument on which the hopes and fears, and one may also say the destinies of mankind, so largely hang, it appears to present a fit subject for poetic treatment.

The ensuing poem is fairly long, but, by way of closing, the opening stanza illustrates quite well the peculiar place the instrument occupied in the nineteenth century consciousness at the very junction between ignorance and understanding:

Clarion of the yawning tomb,

Unto me thou seem’st to be

A very trump of doom.

By the trembling patient stands,

Strange! The trumpet in his hands,

Whilst the sufferer’s eyeball glistens

Full of hope and full of fear,

Quietly he bends and listens

With his quick, accustomed ear –

Waiteth until thou shalt tell

Tidings of the war within:

In the battle and the strife,

Is it death, or is if life,

That the fought-for prize shall win?