‘Along The Lines’ was an immersive, virtual workshop and performance that took place in September and October 2020. It was the result of a collaboration between Dr Amelia Bonea, former member of the ‘Diseases of Modern Life’ Project (currently a Research Fellow at the Heidelberg Centre for Transcultural Studies), Anuja Ghosalkar, a Bangalore-based artist and founder of the documentary theatre company Drama Queen, and the students of Focus High School, Dar-ul-Shifa, Hyderabad. The aim of the event was to encourage students to reflect on the past and present of technologies of communication and the myriad ways in which they shape our lives. The show successfully premiered online on 17 October 2020, amid the challenging circumstances of the ongoing Covid-19 pandemic and a cyclone season that brought extensive flooding to the city of Hyderabad, leaving many students without access to the internet.

The starting point for the workshop was The Magic Mango, an illustrated children's story written by Amelia Bonea as part of her work for the ‘Diseases of Modern Life’ Project and based on her first monograph, The News of Empire: Telegraphy, Journalism, and the Politics of Reporting in Colonial India, c.1830-1900 (Oxford University Press, 2016). Published by Pratham Books’ StoryWeaver, a not-for-profit publisher based in India, the story is currently available in ten languages and has been used as part of a mobile library program for children based in remote areas of West Bengal, India, and by a non-governmental organization working with refugee children in Germany and the Arab world. 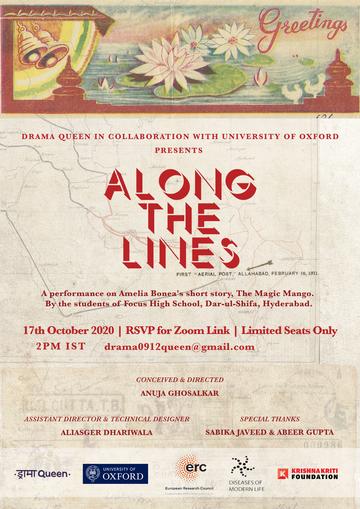 Poster for the 2020 performance of "Along the Lines"

The show was conceived by Anuja Ghosalkar and benefited from the design and conceptual assistance of filmmaker Aliasger Dhariwala. The rehearsals covered a period of four weeks and were conducted entirely online. The final performance was an imaginative recreation of the original plotline that used a very novel means of communication, Zoom, to reflect on the meaning of distance, our yearning for other places and the possibility of traveling within the confines of one's home with the help of self-made maps in a time of countrywide lockdown due to the global pandemic. Students also incorporated old technologies like gramophones and telephone instruments into their performance, annotated imperial telegraph maps and sang about the electric telegraph to the tunes of self-composed rap music.

The project benefited from the generous support of Sabika Javeed and Principal Minhaj Arastu, on behalf of Focus High School, as well as Abeer Gupta of Krishnakriti Foundation, who supplied one of the students with a tablet, thus enabling her to join the project. Reflecting on the performance, Principal Arastu pointed out that, ‘The way the children generated ideas and made connections is invaluable. It means they can crisscross from open-ended questions to concrete examples and back. The other point that I value personally is that this mode of theatre is so authentic, grounded, and meaningful.’ The organizers also wish to thank Prof. Sally Shuttleworth for her enthusiasm for this project and to acknowledge the generous financial support of the John Fell Fund at the University of Oxford as well as the European Research Council, which funded the ‘Diseases of Modern Life’ Project. The performance is available to view at the following link: Along The Lines - YouTube